Rinteln / Hradec Králové, December 16th, 2016 – The plant in the Czech Republic is one of five production sites of the STÜKEN Group. On a production area of approximately 5,000 m² and with 170 employees, it currently achieves a turnover of 12.5 million euros. Since the company expects its sales to double in the next few years, the production area will be expanded by 5,600 m², and the number of employees will also increase accordingly. The new areas were inaugurated together with customers and employees on December 16th, 2016.

The headcount has already doubled since STÜKEN took over operation of Possehl Electronics in 2005. The STÜKEN Group developed what originally had been a tooling company into its competence center for stamping technology and injection molded metal parts. The plant in the Czech Republic also offers complex assembly solutions, mainly serving regional customers.

STÜKEN Hradec Králové will invest even more in qualified employees in the future. For this purpose, the company is setting up an apprentice workshop and training classrooms in one part of the building. Apprentices and new employees will benefit from this.

STÜKEN has been thinking and acting globally since the middle of the 1990s. At that time, the company was generating a considerable part of its revenues in the USA, and consequently opened a plant in South Carolina in 1997.

"You have to go where the demand is and supply locally," says Dr. Hubert Schmidt, commercial manager of STÜKEN. Today, five production sites in Germany, the Czech Republic, North America, and the People's Republic of China belong to the STÜKEN Group. In addition, the group has eleven sales locations in Europe, India, South Korea, Mexico, Central and South America.

The newest production site is located in Germany, in the Rinteln-Süd industrial area. STÜKEN built the subsidiary plant according to lean production principles, attaching great importance to an extremely high level of cleanliness. The site located on Alter Todenmanner Straße in Rinteln-Nord, however, is and will remain the headquarters of the STÜKEN Group. 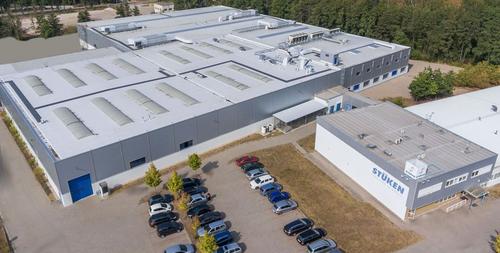