With our precision parts, we implement solutions that even experts would not have considered feasible. We combine complex technologies, finishing processes and services and achieve results that add value for our customers.

Here you will find our international production and sales locations.

STÜKEN has moved into its new building in Shanghai. The production area has been more than doubled.

Shanghai/Rinteln, October 7th, 2020 – Deep-drawing specialist STÜKEN has moved into its new building in Shanghai. This means that the company now has more than twice as much production space available in the Lingang Wanxiang City Industrial Park. The new building is two-storied and includes not only the production of high-precision deep-drawn parts but also a modern high-bay warehouse as well as offices and social rooms.

"The construction of our extension went smoothly and exactly according to plan," says a delighted Wolfgang Grewe, General Manager of STÜKEN Shanghai. Construction work had begun in March 2019, and the structural work was completed on schedule in December. "The interior work and the installation of our production technology were also on schedule. But then the Covid-19 pandemic started. Some final work was delayed by the lockdown," says Grewe. "The opening ceremony with business partners and staff, which was planned for February, had to be cancelled to the regret of all involved". But all in all, STÜKEN is very satisfied with the project. In the meantime, the new hall has been put into operation. Some production equipment has already been installed and is working to full capacity, the finished goods warehouse has moved. Quality management and all testing equipment have moved to the upper floor of the new building. The conditions there are particularly clean. State-of-the-art conveyor systems on both sides of the building support the optimum material flow and high space utilization that are part of the high-tech concept.

The global STÜKEN Group with headquarters in Rinteln, Germany, took its first steps in China in 2005, when Stueken Precision Deep Draw Technology (Shanghai) Co., Ltd. was officially founded. Dr. Hubert Schmidt, CEO of the STÜKEN Group, recalls that production started about a year later - initially in a rented hall. "The increasing demand for high-precision deep-drawn parts soon required a larger production facility. In 2011, STÜKEN Shanghai moved into its own newly built company headquarters about 20 minutes south of Shanghai-Pudong airport. Despite the current difficult economic situation, we expect significant further sales growth in the long term. We have many new projects in the pipeline. The expansion of the company site takes this positive development into account".

Following the rigorous lockdown in February and March, economic development for the plant in China quickly returned to normal. "For almost half a year now, we have been delivering to customers above schedule," says Wolfgang Grewe. "We have been able to increase our production in the third quarter of 2020 by 50 percent compared to the same period of the previous year. We are very satisfied with the development". 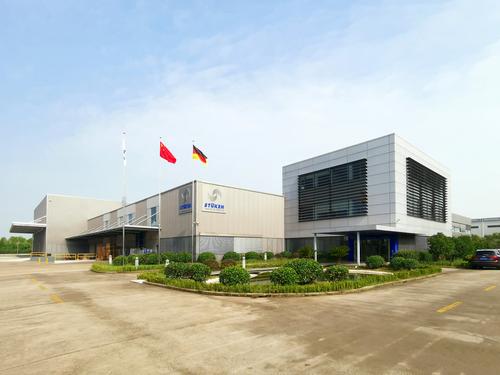 STÜKEN Shanghai with the new two-storey building on the left